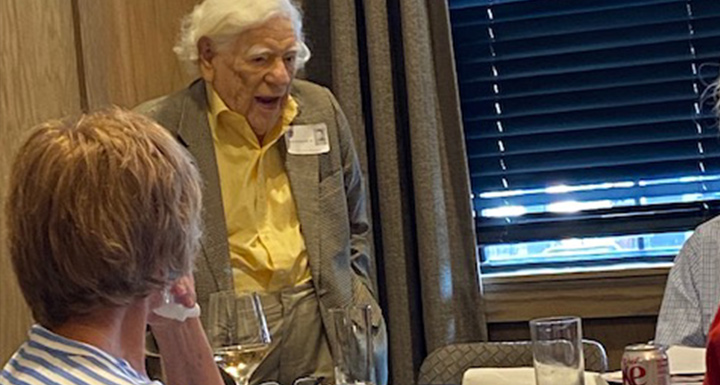 The NE Ohio Alumni Regiment was host to other Regiments including representation from Washington, D.C.’s National Capitol Regiment, the Western Pennsylvania Regiment and the Michigan Regiment.

Featured speaker was 1947 VFMA graduate Victor J. Scarvilli who spoke about the values instilled in him here including team work, hard work and that goals are always attainable. Mr. Scarvilli started a tunnel boring machine company that can excavate hard rock without the use of explosives. At the mid-point of the century, a time when the country’s infrastructure was being built. Mr. Scarvilli’s company helped build it. Among the projects are tunnels for the subways in San Francisco, Baltimore, and throughout Georgia.

Col Stuart B. Helgeson, USMCR (Ret.), president of VFMAC and Mrs. Stephanie Helgeson, director of development provided a report on state of the Forge.

The N.E. Ohio Regiment under the command of Hugh Roberts ’56 served as an Honor Guard for friend and classmate Brigadier General Richard “Dick” Artz ’46 VFMAC, PAANG.