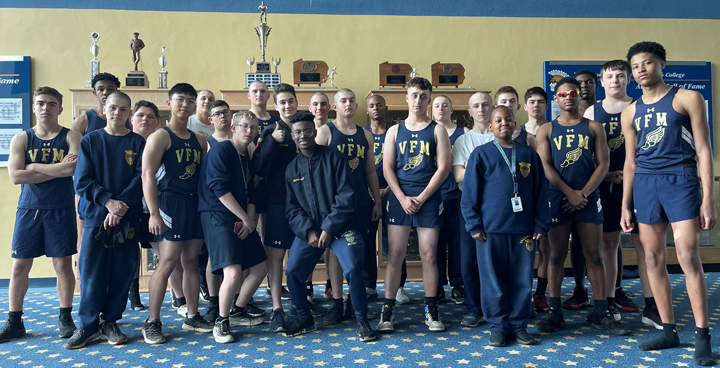 The original Olympic Games held in Athens, Greece in the 5th century featured many events still in competition during spring track today. Sprints, hurdles, relays, middle and long distance runs and  jumps like high, long, triple and pole are all part of what takes place during modern day track meets.

The 20 Cadets on the spring track team have been hard at work preparing for the meets with other schools in the Bicentennial Athletic League. “The Athlete-Cadets who are part of the team have really been working hard,” said Aaron Barkley, spring coach track coach. “The events of spring track require stamina and innate talent which improves with practice. Our guys have both enabling them to compete strongly against the other teams.”

Weather is a factor in the northeast as the season begins in the cold and the dark, with rain and sometimes snow adding to the degree of difficulty. “By the time competition starts, the light extends into the evening and there is at least the promise of warmer temperatures,” said Mr. Barkley.

There is also the promise of a new track which can be installed only after consistently warmer temperatures. Until that, the team practices on the parade loop.

At publishing time, the team had only one meet and was continuing to train for meets against Bristol, Dock Mennonite, Delaware County Christian, Church Farm, Jenkintown, Calvary Christian, Morrisville, Phil-Mont Christian and Faith Christian.  Good  luck to the track team for a great season.