Music at Valley Forge Military Academy and College has been, and always will be, one of the top-tiered extracurricular programs we offer. Our Music Department incorporates the five cornerstones from the institution’s mission statement into the philosophy of music. 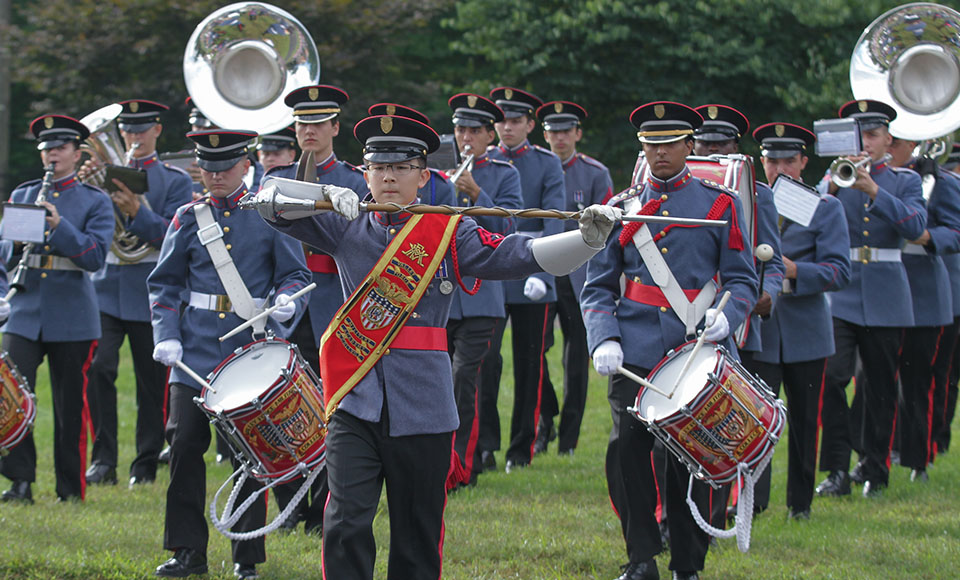 Open
"You are what you do when it counts." Hard Charge

"You are what you do when it counts."

Discussion of future college plans as well as Corps organization and life lessons. ...

Open
Our Plebe Class is conducting a Road March through

Our Plebe Class is conducting a Road March through the neighborhood this afternoon with Mr Else. ...

Interested in attending Valley Forge Military College? Join us for an open house on March 20 learn more about a Valley Forge education and its opportunities! Click the link in the bio to register! ...

Open
What better way to kick off Women's History Month

What better way to kick off Women's History Month then with a quote from the iconic Ruth Bader Ginsburg! #WomensHistoryMonth ...

2LT Wiley earned his officer commission after attending the two-year Early Commissioning Program (ECP) at Valley Forge Military Academy in Pennsylvania. After completing his two years at Valley Forge, he chose to complete his degree at @syracuseu for free.

“I joined the Army to gain experience as a leader and to earn my degree without having student loans. Also, I grew up in a military family and my dad is a big influence in my decision to serve. Now, I’m finishing up my bachelor’s degree and get to serve other Soldiers and their finance needs. I think everybody should give the military a try because it has so much to offer.”

You have more opportunities than you think. Time to seize them. Tap the link in bio to find out if you qualify to join the Army team‼️🇺🇸

Open
A big thanks to @stacyabare for speaking at our Co

A big thanks to @stacyabare for speaking at our College Cadets STARS luncheon today! Thank you for sharing your story!

Stacy is an Army war veteran and advocate of nature as medicine. Check out his story in the short film "Adventure Not War." ...

Our Chinese Club celebrated the Chinese Lantern Festival and Chinese New Year today with a special event in the Boodle! #YearOfTheOx ...

About the Music Program

Our Music Department incorporates the five cornerstones from the institution’s mission statement into the philosophy of music. Cadets involved in the music program range from ages 14 to 21 and receive an excellent education both musically and academically. Each elite musical unit has a particular focus, with an international reputation to match.

For more information on any of the musical groups, please contact:
Vincent DeMarro
Bandmaster
vdemarro@vfmac.edu
(610) 989-1252

The Regimental Band has made appearances in inaugural parades of U.S. Presidents and has historically performed at the inaugurals of Pennsylvania governors since Valley Forge Military Academy and College’s founding in 1928. The Band has also presented a concert at a formal White House dinner and appeared with the famed Philadelphia Orchestra at the Academy of Music in Philadelphia and the Kennedy Center in Washington, DC. They have also performed with the Philadelphia Pops Orchestra.

The Band maintains a busy schedule, playing daily for the Corps formations, as well as for regimental reviews, parades in the fall and spring, three formal concerts on campus, the annual Military Tattoo, and many outside concerts and parades for civic and charitable organizations. Most recently they represented the U.S.A. at the Royal Nova Scotia International Tattoo.

The Regimental Choir is open to all cadets who enjoy making music and wish to broaden their educational experience.

The group has a prestigious performance history, including venues like the White House, the Pentagon, the Lincoln Center for the Performing Arts in New York City, and the Academy of Music where they performed with the Philadelphia Orchestra.

In their spare time, the Regimental Choir provides music for Valley Forge Military Academy and College’s annual Military Tattoo in November and the Holiday Concert in December. They also perform at Sunday services in the Alumni Memorial Chapel of St. Cornelius the Centurion on the Valley Forge campus.

The brass members of the Regimental Band also form a special group called the Heraldic Fanfare Trumpeters. They provide a regal significance on and off campus. These trumpeters routinely perform prior to on-campus Chapel services throughout the school year and are on call to perform for Presidents, Supreme Court Justices and Governors on a regular basis.

Valley Forge upholds the traditions of Field Music, which is older than American patriotism. Throughout history, soldiers have used music to communicate with one another.

The school’s Field Music group is comprised of Middle School band members as well as all academy cadets who have an interest in learning an instrument. No experience is required.

Field Music plays regularly for parades and formations both on- and off-campus. With Field Music, cadets are able to become competent musicians within a short period of time and contribute their talents to this gifted unit.