The Leaders Who Shape Valley Forge

Our distinguished board members bring a variety of lifetime experiences to inform their decisions and ensure the future success of Valley Forge. 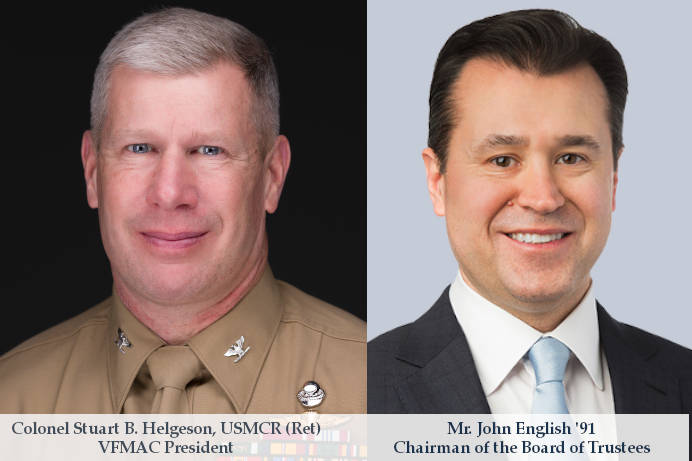 Cadet William Anozie, class of 2022, leads Pennsylvania in scoring after scoring 51 points in last nights game. This makes him the first Valley Forge basketball player to score over 50 points in a game in the last 10 years. We can’t wait to see what the rest of the season holds. #gotrojans🏀 ...

Open
The Holiday Concert is about to begin! Streamed l

The Holiday Concert is about to begin!

@thederekfrazier
Thank you Valley Forge Military Academy for all the new swag gear and the support this summer while I was on #BB23 … I am a valley forge alumnus class of 2010 ! https://www.vfmac.edu/academy/academy-admissions/academy-online-application/ ...

Open
Academy Rifle Club Why do you give back to VFMAC?

College Cadets speak about what Valley Forge means to them.

Open
Regimental Band Why do you give back to VFMAC? Se

Open
Academy Stem Classroom. Why do you give back to V

Open
Did you hear that the College just received an awa

Did you hear that the College just received an award? Dr Phillips shares the awesome news.


Error: API requests are being delayed for this account. New posts will not be retrieved.

David Cummins serves as Senior Vice President of Serco’s Citizen Services Business Group. He is responsible for managing the three business units that comprise Serco’s civilian work for federal, state, and local governments in the U.S. and Canada.

David has more than 20 years of experience in government contracting. Before joining Serco in late 2016, he was a Senior Vice President for Conduent Inc. (formerly Xerox and ACS) where he ran their mobility, parking, and court business units. Prior to that, he led strategy, sales, marketing, and acquisitions for their Transportation division with operations in over 30 countries. He has led numerous innovation project and has been co-awarded 15 patents. David was the Director of Operations Management for the 2002 Salt Lake Olympic organizing committee, and he was a recipient of the 2003 International Project of the Year Award, presented by the Project Management Institute.

David holds an MBA from the University of Michigan Business School, an MA in International Affairs from the George Washington University, and a BA in Political Science from Messiah College. He serves as a member of the Board of Trustees for the Valley Forge Military Academy and College and is involved in other volunteer work for non-profits.

Over the course of his 30-year career in the Army and Army Reserve, Mr. Bartasius served in a variety of command and staff positions in airborne, light, special operations, Joint Commands and training units serving in Southwest Asia (Iraq and Afghanistan), the Republic of Germany and the United States. Having risen to the rank of Colonel, his Senior Officer assignments began as Senior Military Advisor/Military Transition Team of the Coalition Military Assistance Training Team (CMATT), Multi-National Security Transition Command – Iraq (MNSTC-I) in October 2004.  He assumed duties as the Chief, Civil Affairs Plans, 358th Civil Affairs Brigade in January 2006.  From July 2006 to December 2007, Mr. Bartasius was assigned as the Brigade Commander, 1st Brigade, 98th Division (Institutional Training). In January 2008, he assumed command of a detachment, J2/JT, Army Reserve Element, United States Central Command (CENTCOM) at MacDill Air Force Base, Florida and served as a Senior Chief, Observer, Controller and Trainer of the 75th Division (Battle Command Training Division) to February  2010.  In March of 2010, he served as the Director, Region II (NJ, NY, PR, VI), Emergency Preparedness Office (NORTHCOM) in support of the Department of Homeland Security (DHS) and the Federal Emergency Management Agency (FEMA).  Honorably, his last assignment before retiring in September 2013, he was assigned at the United States Military Academy, West Point as a Military Academy Liaison Officer representing the State of New Jersey, in collaboration with the NJ representatives and their staffs of the US House of Representatives.

He is a lifetime member of the Disabled American Veterans, Veterans of Foreign Wars, Military Officers Association of America and Association of the United States Army.

Chairman Emeritus, Valley Forge Military Academy Foundation. Mr. Floyd is also a 1963 graduate of the Academy.  During his tenure at Valley Forge, he oversaw the Pennsylvania House of Representatives approval of Senate Bill 560, legislation introduced by Senator Mensch, creating a new program for legislative appointments to Valley Forge Military College; the designation of the College as “The Military College of Pennsylvania;” and the successful integration of women into the Corps of Cadets at the College.

Mr. Floyd is the retired Chairman and CEO of Physiotherapy Associates, the largest provider of outpatient rehab services in the U.S.  Prior to Physiotherapy, he was Chairman, President and CEO of Beverly Enterprises, Inc., a leading provider of eldercare services in the U.S. with $2.2 Billion in revenue.  Prior to Beverly, Mr. Floyd held leadership positions as CEO and President of Choice Hotels International, the largest franchiser of hotels in the world, as well as Chief Operating Officer of Taco Bell and KFC, both of which were part of PepsiCo’s Restaurant Division.

Mr. Floyd holds a B.A. Degree in American Studies from the University of Pennsylvania (1967) and an MBA Degree from the Wharton School (1969).  After graduation from Wharton, he served as an officer in the Fifth Infantry Division (U.S. Army) from 1970-72.

In addition to being the Chairman Emeritus of the Board of Valley Forge Military Academy & College, Mr. Floyd is the former Chairman of the Board of Buffet Holdings, Inc., a multi-million family dining restaurant concept. He is also on the Board of Korn-Ferry, the world’s largest executive search and talent consulting firm, El Pollo Loco Restaurants, a $600 million flame-grilled chicken restaurant chain, Pivot, an Outpatient Physical Therapy company, and Muzinich Capital LLC.

Dr. Christine Anne Royce is currently a professor in the teacher education department and co-director for the MAT in STEM Education program at Shippensburg University in Shippensburg, Pennsylvania having joined the faculty in 2002. In her current position, Royce—who served three consecutive terms as the chair of the teacher education department—teaches classes in science education, assessment, curricular planning and research design at the undergraduate and graduate levels, and implemented a new online teaching certification program which prepares educators to teach in blended or online environments. Royce has been a passionate educator and dedicated leader in the science education community for more than 25 years. She brings with her experience working at the elementary, middle, and secondary school level in both public and private schools having taught science, math, and serving in administrative roles. She holds instructional and administrative certificates in Pennsylvania, Delaware, and Virginia.

External to her position at Shippensburg, Dr. Christine Anne Royce is the retiring president of the National Science Teachers Association (NSTA) having completed her term as 2018-2019 President. Her involvement with NSTA has been extensive having been elected to the NSTA board as director of professional development (2009-2012) and prior to that serving in the role of district IV director (2006-2009).  She is the column author for Teaching Through Trade Books which appears in Science and Children and has authored multiple books. In addition to her work and commitment to NSTA, Royce is extremely active with other state and national organizations and STEM initiatives. She was the PSTA Exchange editor, executive secretary, and twice served as the president of the Pennsylvania Science Teachers Association. Royce has also served as the treasurer for the National Science Education Leadership Association, and was an NSF panel judge and chair for the Presidential Awards for Excellence in Science Teaching.

She was invited to serve on the Academy Oversight Committee in July 2018 and joins the BOT having had experience working at Valley Forge Military Academy from 1988 through 1992.  She served as an Assistant Camp Commandant for the summer camp program.  Additionally, she worked in the Senior ROTC Department for nearly two years as an Administration and Operations Specialist.

During her distinguished career, Royce has received a number of awards and honors. Her accomplishments include receiving NSTA’s Fellow Award (2016), UPCEA Excellence in Teaching Award (2016), Pennsylvania Association of Colleges and Teacher Educators’ Teacher Educator of the Year Award (2010), National Association of Geoscience Teachers’ Outstanding Earth Science Teacher – Eastern Region (2003), and the Woodrow Wilson National Memorial Fellowship (2000). Royce was also named a 1997 Presidential Awardee for Excellence in Science Teaching. Her academic preparation includes a B.S. degree in elementary education from Cabrini College, a M.A. degree in curriculum and instruction from Delaware State University, a M.S. degree in school administration and supervision from the University of Scranton, a M.B.A. from Shippensburg University, and an Ed.D. in curriculum, instruction and technology education from Temple University.

Mr. McNew has lived in the Annapolis area his entire life with the South River and Chesapeake Bay being a big part of his life.

Founder/Managing Principal of Tratt Properties LLC, a Phoenix based commercial real estate development/investment firm for the past 23 years.  He is regarded for his distinguished expertise in real estate development, acquisition and property management services for logistics and e-commerce properties.  This includes site selection, ground up construction, and warehousing and distribution operations.

Jonathan brings over 30 years of real estate experience to the leadership of Tratt Properties LLC.  His early experience as an industrial broker with Iliff Thorn and Daum Commercial Real Estate Services prepared him to start Industrial Brokerage, Inc. in 1992 before broadening his scope to development and investment as Tratt Properties, LLC in 2000.

Jonathan holds a Master of Business Administration in International Management from Thunderbird School of Global Management and A Bachelor of Science from the University of Dayton.  He serves on the Board of Trustees for Valley Forge Military Academy & College in Wayne, PA.  In addition, he is an active Board member for the National Association of Commercial Real Estate Development Industry’s NAIOP.  He serves on its Executive Committee, is a Governor of the NAIOP Research Foundation, and is Vice-Chairman, Trustee of the NAIOP-PAC.  By way of his expertise and leadership, Jonathan also served as the Chair of the Industrial Development II National Forum of NAIOP.  Jonathan is a long-standing local sponsor and Developer Association Member of SIOR (Society of Industrial and Office Realtors).

Jonathan contributes to community service and charitable organizations across the country.  This broad range of philanthropic activities includes numerous Jewish and religious organizations, as well as academic institutions, and professional associations.  In addition, Tratt Properties, LLC focuses contributions in the local markets where they own and operate properties to further the commitment to meaningful service.

Mr. Kelton is: Senior Vice President for National Security Solutions, DynCorp International; an Outside Board Director of Blue Planet-Works, LLC; a member of the Board of Trustees of Valley Forge Military Academy and College; an Advisory Board member for FORCEPOINT, LLC; Board Chair of the Spookstock Foundation (benefitting the CIA Memorial Foundation and the Special Operations Warrior Foundation); an Advisor to the Chertoff Group; and a contributor to The Cipher Brief, writing on intelligence and national security issues.