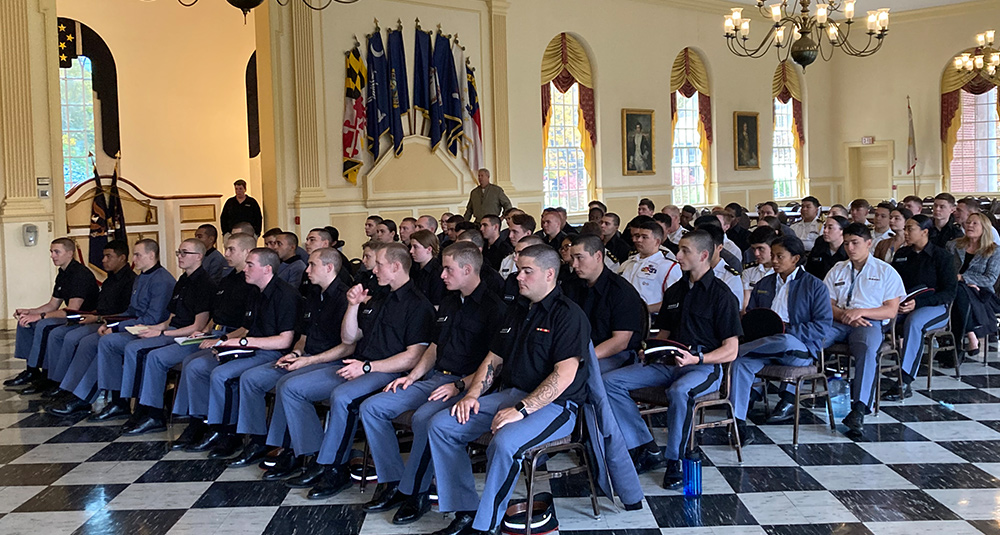 They stood on the Main Area wondering if they had made the worst decision of their life.  Their parents had just dropped them off three hours prior to Valley Forge Military College hoping that this school would help set them on the path to success they desired even though they did not desire a military career.  They hoped this place would provide them with the skills to succeed and excel not just at VFMC and their transfer school to finish their bachelor’s degree, but also in the civilian sector.  Would VFMC set them apart from their peers?  One new Cadet came to VFMC from another school where he was lost in the student body, just one of three hundred in a lecture hall and not able to get the academic support he needed.  Another took a gap year after high school to see what he wanted to do next and unsure of how to get there.  The third comes directly from high school, very shy and used to his parents doing everything for him.  These three Cadets are hoping to find themselves at VFMC.

Theodore Roosevelt said, “The first requisite of a good citizen in this republic of ours is that he shall be able and willing to pull his own weight.” That goes for women, too.

It has long been a misnomer that Valley Forge Military College (VFMC), located in Wayne, PA, was singularly focused on producing military officers.  VFMC utilizes a “military model” to provide structure enabling students to succeed in whatever they wish to do in life.

While VFMC does offer military training through the Army’s Reserve Officer Training Corps (ROTC), the College also takes traditional students from all walks of life, turning them into Citizen Leaders using the military model.

“The Citizen Leader track is for the student looking for the lessons and training that are typically provided to military-oriented Cadets, but who may not necessarily desire a career in the military,” said Robert Smith, Ph.D MEd, provost of VFMC. “Citizen Leaders become equipped with the understanding and value of self-discipline, physical fitness, a daily schedule, leadership skills, and character development for everyday life.”

From the time they step onto Campus until graduation, all students are members of the Corps of Cadets – the student body of VFMC. It is Cadet led, and they are responsible for holding each other accountable and helping each other overcome challenges.

To become a member of the Corps of Cadets, all new students go through a Plebe system.  This is a period of time where they will learn the customs, courtesies, and traditions of VFMC as well as how to live within the Corps of Cadets.  Their day begins at 0600 with physical training, from 0800-1600 they proceed to their classes, from 1600-1730 they have time for club activities and intramurals, and from 1900-2100 they have mandatory study hall.  This is the structure that the military model provides and allows Cadets to begin to develop the personal motivation and time management skills that will serve them well when they leave VFMC and must create their own structure.

Teaching young people the skills necessary to discipline themselves and lead others is at the heart of the military model of education at VFMC.  The College is a leadership factory where students start honing this skill from day one.

As a Plebe, new students will be informal leaders helping their peers adapt to the military model lifestyle.  This may include teaching them how to shine shoes, make a proper bed, etc., and progress into the classroom where they may help tutor those that are struggling in subject areas they are exceeding at.  Once complete with the Plebe system, they can become formal leaders by gaining rank in the Corps of Cadets and now being responsible for others and ensuring their wellbeing.  No one can succeed alone at VFMC, the teamwork concept is developed from day one and will serve them well in whatever field they decide to go into.

In addition, VFMC does capitalize on the experience the ROTC instructors have by asking them to teach the leadership classes compulsory for all Cadets every semester.  All Cadets take Military Science 100 & 200. This further allows them to see different techniques and refine their leadership style by gaining practical experience with the Corps of Cadets.

This also translates to the classroom. Cadets show respect to their professors with the entire class coming to attention when the professor enters as well as having the senior Cadet report the class to the Professor.  This teaches manners and respect that translates well to the civilian sector and is sometimes lacking in today’s business world.

Additionally, VFCM has an 11-1 Cadet to teacher ratio.  Cadets are expected to come to class prepared and to participate.  VFMC does not subscribe to the lecture method of teaching but rather utilizes the experiential model.   Cadets take what they learn in the classroom and apply that knowledge through field trips.  This is an experience that many other institutions are not able to provide to a larger student body.

This education model also emphasizes individualism within a learning environment. Cadet-led intramurals and clubs offer personal growth for individual interests. “A desire for personal growth is not just about academic excellence,” said Cadet Elizabeth Verbicka, a Citizen Leader. She started Creative Camo, an outlet for creativity on campus. “Creative Camo and the Press Corps, another Cadet-led group, encourages accountability and initiative within student ranks and translates to taking charge and leading others.”

VFMC cadets receive lessons and build characteristics that develop them into the highest quality citizen leaders despite their age. “Students who pursue this track are those who desire personal growth concurrent with academic excellence,” said Dr. Smith. “ Those who select this program are not just preparing for their professional future but preparing to live their best life, understanding the full extent of their capabilities, honing their skills for the greater good of a global society.”

Provost Smith says educating and enabling Citizen Leaders can help create a roadmap for those who see their role in a better world. “Our graduates face challenges with grit and determination.  They see the potential within their communities and how they can overcome issues together.  They are willing and able to become active participants in the changes and solutions they wish to see.  They show signs of integrity, leadership, or academic excellence.  While these qualities are rare in our society, they live in each of us, and at VFMC, we nurture the students so that it becomes a natural part of their being,” he said.

As for the three Cadets mentioned at the beginning of the article, they not only succeeded but thrived in their first year at VFMC.  The one that struggled academically now has a 3.39 GPA and will be the Regimental Sergeant Major this year.  The second student also found his footing and purpose at VFMC, he served as an intern for a political campaign this summer and will return as the Regimental Commander this year.  Our last Cadet also found his voice and started coming out of shell.  He is thriving and will be the Regimental Adjutant, he will be the face and voice of VFMC at all formations and parades this year.

Do you have what it takes to be a Citizen Leader?