〉 Go To the Academy Site 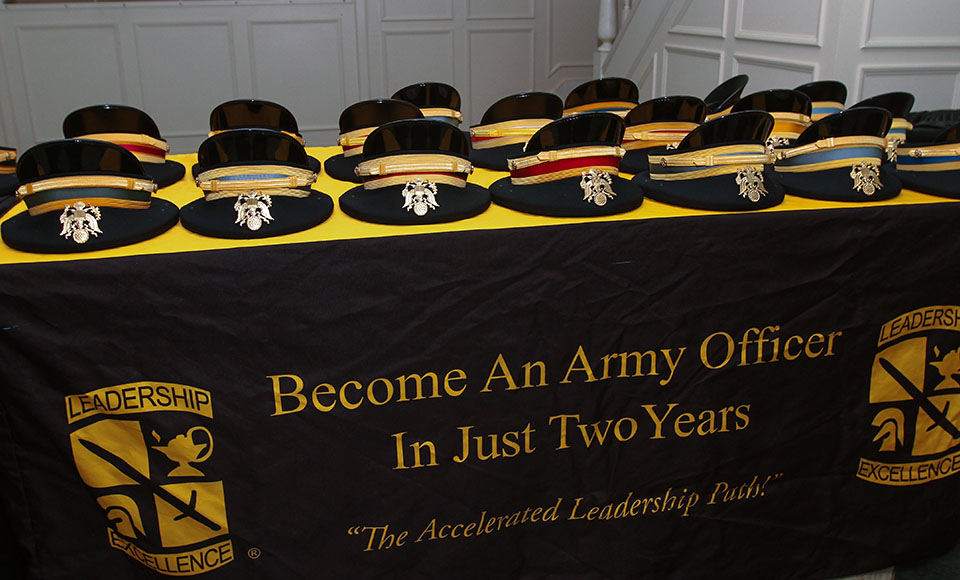 What does the scholarship pay for?

The Army covers a cadet’s full tuition while the school, Valley Forge Military College, grants an additional scholarship covering room and board to our ECP scholarship cadets.

How much is the stipend for an ECP cadet?

Cadets receive a stipend of $420/month freshman year and $420/month sophomore year. They also receive a book allowance of $600 each semester.

What is the service obligation after commissioning?

Cadets graduate from VFMC with an associate’s degree and simultaneously commission as a 2LT into the U.S. Army. They will have a service obligation of either 8 years in the Reserves or National Guard, or 4 years of active duty. The service obligation begins at graduation from VFMC, so the 2LT will begin serving those years in a non-deployable status in the Reserves or National Guard while they attend their 4 year university.

Does the scholarship cover any of the costs of the follow on 4 year university?

Yes. Second Lieutenants that graduate from an ECP have the option to use Army funds (called EAP) to pay full tuition for their follow on school for up to two years. EAP will pay either full tuition (no cap) or room and board (capped at $10,000). *There is an additional service obligation of one year Reserves or National Guard for each year that a Lieutenant uses EAP. (There is no additional service obligation if the officer goes active duty).

Any of the 1000+ Army ROTC affiliated schools. You can attend any school that is affiliated with Army ROTC to include the Ivy Schools, private institutions or state schools.

Am I able to commission into the active duty?

Yes. All ECP cadets commission into the Reserve component after completing their associate’s degree at VFMC and serve in the Reserves or National Guard while they complete their bachelor’s degree at a follow on four year school. If an ECP cadet wishes to compete for active duty, they must request to revoke their reserve status during their sophomore year at VFMC. If that gets approved, they will then compete for active duty during their senior year along with all the other ROTC cadets for that year’s cohort.

How is it possible to commission in two years?

Incoming freshman to VFMC attend a four day mini-camp at VFMC and then go to Basic Camp held at Ft. Knox (approximately 30 days) the summer before beginning ECP. This training counts as credit for Military Science 100 and 200 level classes, which they would otherwise be taking during their freshman and sophomore years at a traditional four year program. That training enables them to be Military Science 300 level as freshman. We call them MS III’s. They will attend Advanced Camp after freshman year at Ft. Knox and return as MS IV’s while they are sophomores. After graduating from VFMC with an associate’s degree, they commission as officers and start serving in the reserves. They must complete their bachelor’s degree as part of their contract within 36 months.

If I am an enlisted member of the Reserves or National Guard, can I do ECP?

Yes. Your status will change from enlisted to cadet.

Can I attend Army schools (Airborne, Air Assault, etc.) while in the ECP?

Yes. Cadets have the opportunity to attend additional training after attending the required ROTC Advanced Camp the summer after their freshman year. Every summer we have cadets attend Airborne and Air Assault schools, as well as Cadet Troop Leader Training and Drill Cadet Leader Training (CTLT/DCLT) shadowing either a 2nd Lieutenant Platoon Leader or a Drill Sergeant during their daily duties and training. Cadets also can apply to the Cultural Understanding Language Program (CULP) where they travel with a team of Cadets to a foreign country and partner with local universities or militaries to conduct language and other training and service projects. We have several cadets accepted to participate in CULP every year.