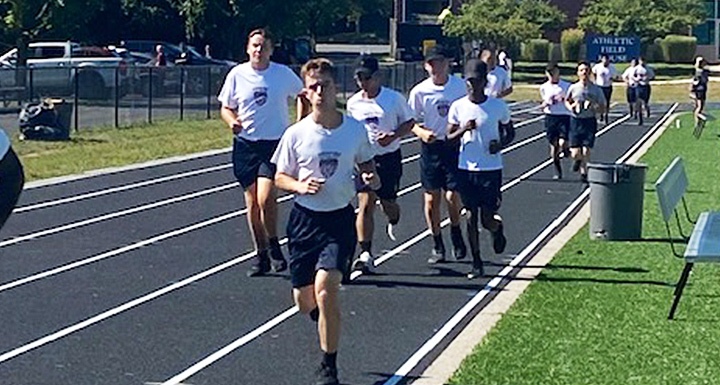 VFMAC’s Cross Country teams made notable marks across the league this fall. The College team, coached by Michael Pachella, consisted of 12 runners – 10 men and two women.

Coach Pachella says they improved through the season. “The goal every year is two-fold: Commit to become a better distance runner and a great teammate – both will benefit them in their military career and in life,” he said. While most opponents ran during the summer, VFMC runners spent the summer at Fort Knox in Cadet Advanced and Basic Camp. However, they quickly made up time with morning and afternoon running workouts that prepared them for the race day.

All of our meets are open invitationals hosted by schools throughout the area. The men run eight kilometers, while the women run five or six kilometers, depending on the venue. Coach Pachella said, “Our runners performed well with times consistently improving so that by the final meet, each runner had a personal best. I am proud of their effort. They represented VFMAC well.” Already looking ahead to next fall, Coach Pachella says a strong freshmen team will return as sophomores to lead next year’s team.

At the Academy level, Coach Aaron Barkley relies on his experience as a XC runner at Overbrook High School and the University of Maryland to help lead the team. There are 13 XC runners and he calls them all dedicated and having put forth outstanding efforts for the season. However, there are three Coach Barkley calls real standouts.

Freshman Jacob Quimby has finished first for VFMA in every meet this season and looks to be a promising talent. Junior Benjamin Stern, who is currently going through the Plebe System as well, has been outstanding in getting accustomed to VFMA in addition to performing at a high level in cross country practice and meets.

Junior Turner Boyle, a member of the VFMA Track and Field team last Spring and is currently the Company Commander of B Company. He is battling with (then) plebe Stern for the number two VFMA finisher and both have their sights on catching Cadet Quimby. Behind them is a solid group close in ability who all are in competition for top five finishers during the season.

The team practices in different settings throughout the season to keep a sense of variety and fun to the workouts.  They run on hilly loops on campus multiple times in a practice. They have been seen running through the town of Wayne and into the neighborhoods, and on the Radnor Trail which provides an absence of traffic, lots of scenery, and other runners. For speed workouts, the team has used the brand-new track.

There are eight teams in the Bicentennial Athletic League and VFMA has finished 4th and 5th in the two league meets. Coach Barkley says the Five Cornerstones are in evidence on a consistent basis on the XC team as runners have distinguished themselves as excellent students.

“Team members show Leadership in encouraging each other to perform at their best, and holding each other accountable during warmups and stretching drills, and during the long runs,” he said. “The sportsmanship that they show towards opponents and coaches during the meets is a shining example of Character Development.” He calls the daily practices a demonstration in Physical Development and participation in such a demanding sport is an example of Personal Motivation. “Over difficult terrain, most want to just stop and many would, but our Cadets have pushed themselves and done well.”