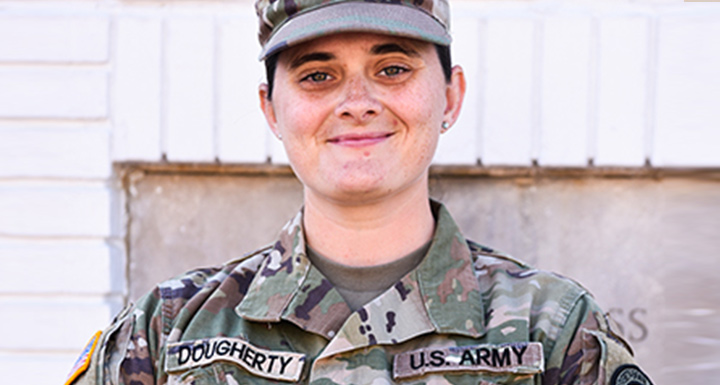 US Army Sergeant Kathleen Dougherty has been named Bandmaster at Valley Forge Military Academy and College. She replaced Bandmaster Vincent DeMarro who retired after several long and successful years in that role.

Sergeant Kathleen Dougherty manages the music curriculum for both the Academy and College, as well as leading the Regimental Band and other ensembles in a variety of performances. “While I am still fairly new in the position, I can already tell the Cadets are a great bunch of people,” said Sergeant Dougherty. “They are responsible and fun, come to practice and are prepared.”

Sergeant Dougherty is a graduate of Indiana University of Pennsylvania and holds a BS in Music Education. She served as the Musicale Chair for music fraternity Sigma Alpha Iota at IUP. In that role, her duties included growing her sisters’ musical talents, encouraging them to perform, and organizing the annual Tri-Fraternal Musicale.

As Bandmaster, Sergeant Dougherty must know her way around virtually all the instruments being played by those she is conducting. She is a classically trained violinist, plays trombone, and is confident playing to many others to name. And while band and orchestral music are part of her days, she enjoys rock music, both alternative and soft.

“I love music and enjoy being around it,” said Sergeant Dougherty. “ The VFMAC band has a great reputation and is among the most recognized in the educational music world. I am excited to have the opportunity to lead it and look forward to our performances.”

Prior to her appointment as Bandmaster at VFMAC, Sergeant Dougherty was a substitute teacher, including several long-term substitute positions most recently in the Methacton School District in suburban Philadelphia. In addition, Sergeant Dougherty teaches with the Brad Schoener Foundation as a private and a group teacher.

She is also a member of the United States Army Reserve, serving with the 78th Army Band based out of Joint Base McGuire-Dix-Lakehurst. Proud of her service to the US, she plans to continue serving alongside her instructional duties.