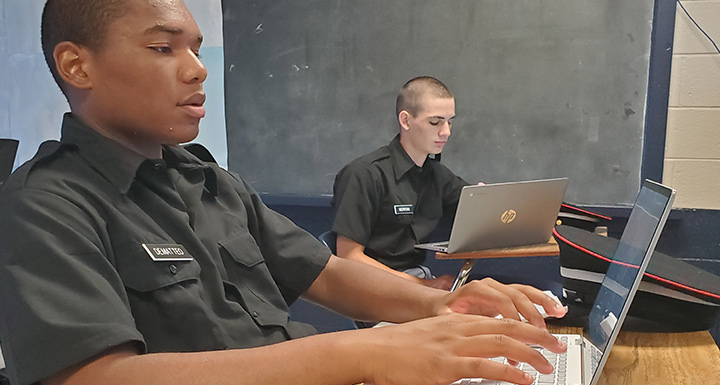 The fall 22 academic year brought new and tighter regulations for mobile phones among the Corps of Cadets. The policy is simple: nobody has one.

“The literature is clear that mobile phones are a distraction to student learning,” said Garrison Sergeant Major William Mott OBE MVO, Commandant of Cadets. “This year we decided to make a change and the results are remarkable after only a short time.”

On arrival, all Cadets were required to turn in their phones. They are kept in a safe place. To overcome parental concerns about communicating with their sons, parents received direct phone numbers to the barracks and to the TAC officers to use if necessary.

Cadets remaining in good standing academically and in overall behavior, are able to earn access to their phones as a privilege. It is provided to them for walk-out leave on Wednesday evenings and on weekends.

Plebes have always had no access to their mobile phones until they complete the Crucible. Once that is successfully completed, they receive their phones to call their families and can then earn phone privileges as any other Cadet.

“It has been a struggle for them to not have their phones 24/7,” said Lauren Wochok, dean of VFMA. “However, after a few weeks of no phones in the schoolhouse, we have seen increased class participation, more homework completed in the evening, and better quality of sleep for the Cadets.”

A new laptop policy requiring Cadets to use only school-distributed computers and VFMAC internet access is another factor contributing to fewer distractions. This fall, all students have access to the internet only through the VFMAC system which limits access to games and other sites which can be distracting and disruptive. “We have all become accustomed to having technology be a 24/7 crutch of entertainment and while there is value and ease to it, it does not always forward learning and behavior linked to our Five Cornerstones,” said GSM Mott. “While tough, there is no question the results are positive, the Cadets are surviving and while they won’t ever acknowledge it publicly, probably recognize the positive difference the new policy has made.”