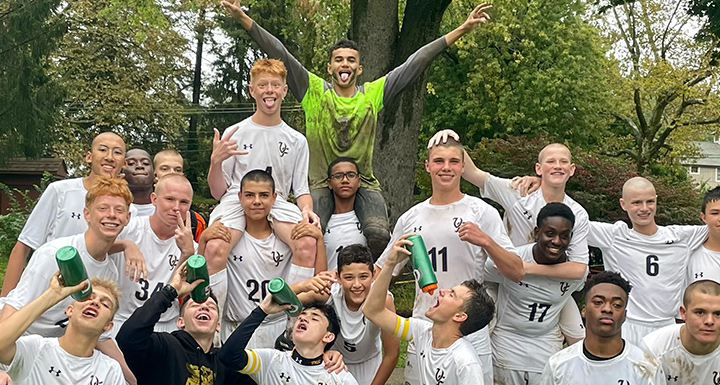 Using statistics about fans in stands and watching at home along with endorsements and advertising support, the digital sports media outlet Sporty Tell reports soccer as the most popular sport the world over. It is popular at VFMAC too.

This year’s varsity team is represented by 22 highly motivated young men and those who put it out there every day at practice earn a spot on the starting 11.

As the head coach, Mr. Rob Herburger says it is all about the three Cs: Chemistry, Composure, and Commitment. “The players on the pitch need to know one another, anticipate their moves, and know how they will respond. That is the chemistry,” he said. “Composure relates to bearing and being able to remain mentally engaged, regardless of what is happening in the match. And commitment is showing up, every time on time and holding yourself and others accountable for doing individual and collective best.”

Coach Herburger says many schools in the league are ones where the teams grow up together and play together year after year since they are young children. At VFMA, it is different. “Our Cadets come from all over the world and US – very few have played on the same team prior to playing here,” he said. “That and the occasional matter of English not being the first language are challenges that other teams don’t face.”

“The graduating seniors and departures from last season left holes in our formations that have been filled with bigger, stronger, and faster athletes. I am very impressed with this year’s squad,” he said.

At the time of publication, the team has played nine matches with two wins. Of the remaining matches, two are against three schools highly ranked in the league and across the state — one of which is the defending champion.

“Regardless of our record, I can say with full confidence, the soccer squad at VFMA is the most prideful group of Cadets on campus! Their chants and cheers will give you chills from the sideline,” he said. “When our team is firing on all cylinders, there is not a team in the division that can best us.”