The Spring Plebe Class Proves Itself with Leadership from Cadets 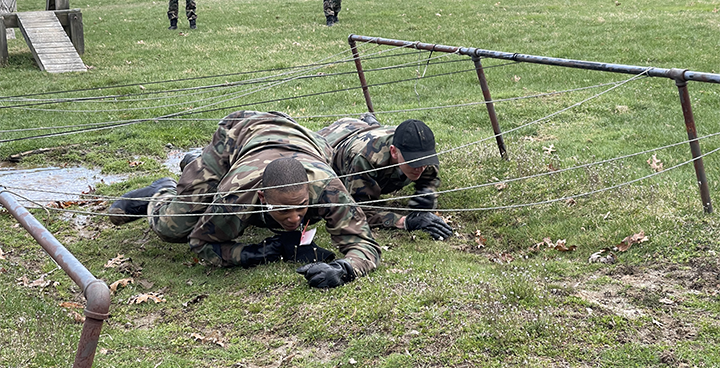 With Spring blooming all over campus, it is hard to recall the frigid January day on which the latest class of cadets arrived at VFMA. Spanning six states and two different countries, the young men were about to mark a change in how they are educated.

“We know our system is a challenging one and it is meant to be,” said William Mott, OBE, MVO Garrison Sergeant Major (ret) Commandant of Cadets. “We know these young men want to become their best and the instruction they receive here beyond the traditional classroom stretches them to the full extent of their capabilities.”

Getting all that into a single day means the day begins early – in the dark, in the cold, and sometimes in the rain and snow. Before breakfast, plebes and Cadets start working on the physical development Cornerstone. Push-ups, sit-ups, a run, and more. That effort requires the other Cornerstones of personal motivation, leadership, and character development.

“Not everyone who arrives here is in strong physical condition and in some cases, never had to challenge himself in this way,” said GSM Mott. “It is here where we see the beginnings of them thinking beyond themselves as they support and encourage one another.”

The academic excellence Cornerstone starts after breakfast and after formation with classes from 0900-1530.

“Like all Cadets who arrive at VFMA, the spring class represents young men who seek to be more than they are right now,” said Paul M. Lea, MS, Ph.D., Class of ‘87 and ‘89C, and dean of the Academy. “While only about four percent will choose a military career, the discipline and education they receive here prepares them to be society’s future leaders.”

Those students arriving for the spring term remain plebes for most of the semester. They train together, eat together, live together and are guided toward earning full Cadet status by more senior Cadets who once stood where they are. “As a Cadet-led system, we develop leaders – around the leadership Cornerstone,” said GSM Mott. “One learns to lead by first learning to follow and our Cadets in the leadership roles over plebes have done an outstanding job demonstrating what leadership looks like.”

To move from plebe to Cadet, each must complete the rigorous training demonstrating physical and mental competence, and understanding the VFMA mission. Called the Crucible, it occurs on a date unknown to the plebes. Awakened even earlier than routine, they spend the day completing a run, a swim carrying a (silicon) weapon, another run carrying a gurney loaded with five-gallon containers filled with water, a relay race around the track, and finally, a cannon-pull. On successful completion, they earn their Capshields – the medallion to affix on their covers. Shortly thereafter, at a plebe recognition event, they are encircled by the Corps of Cadets, marking them as new Cadets, a status earned by learning the Five Cornerstones and maintained by living into them.

“Each of the entering students for the spring semester successfully completed the Crucible and earned his Capshield,” said GSM Mott. “We see already that this is an exceptional group of young men destined for great things.” In the fall, these new Cadets along with those of other classes will welcome a new set of plebes and set about the near century-old tradition of helping them earn their Capshields.