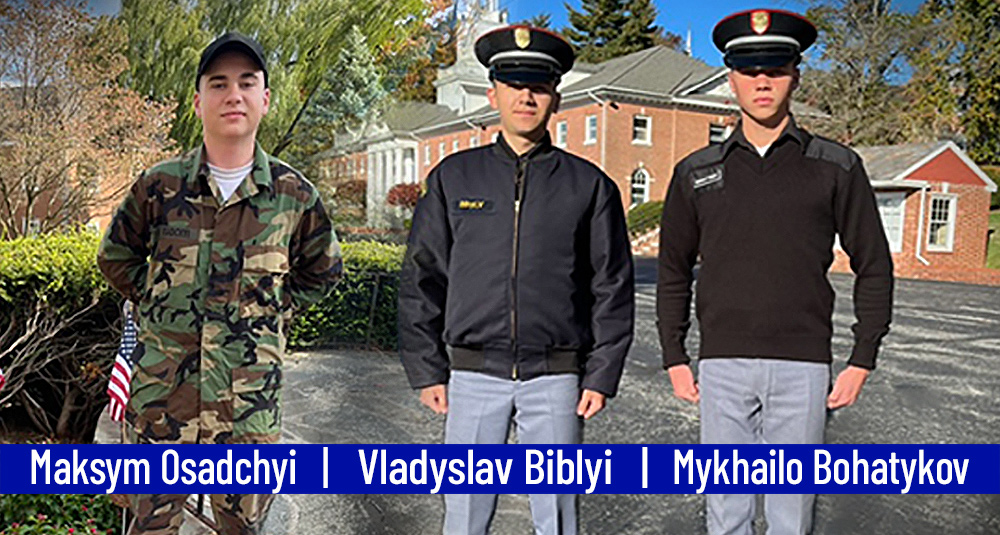 For many in the world, the war in Ukraine is a terrible news story – one watched with disbelief and horror. For Cadets Vladyslav Biblyi, Mykhailo Bohatykov, and Maksym Osadchyi, it is a tragedy unfolding in their homeland where their families remain.

The three are first year Cadets at VFMAC – Vlad and Mykhailo at the Academy and Maksym at the College. Prior to arrival in the US, each lived happily with their families in different parts of Ukraine, and their lives were full of plans, hopes and joys much like those students of any other peaceful nation.

That changed in February 2022 when Russian forces invaded and in the ensuing months, obliterated Ukrainian cities, and civilian and military sites.

Education is only one of many disruptions in Ukraine. And while VFMAC leadership knew it could not help every student there, discussions opened early in the conflict to create a path for the three students here now.

All three are beneficiaries the Cory Stein Memorial Scholarships presented to the institution by Mr. Ken Stein in honor of his late son, Cory. Other funding and support are derived from the annual VFMAC Golf fundraiser conducted every May.

“There are three additional lives in which VFMAC is making a difference,” said Col Stuart B. Helgeson, USMCR (Ret), president of VFMAC. “We are grateful to Mr. Ken Stein for his generous support to these students and to the others whose education he makes possible, and to all our benefactors who support VFMAC.”

Here are the stories of three Ukrainian Cadets:

“I had already graduated from high school and begun studying at Ihor Sikorsky Kyiv Polytechnic Institute, in the school of Thermal and Atomic Energy, majoring in Computer Science,” said Vlad. High school graduation in Ukraine is after 11 years of school, not 12.

Living at home with his parents and disabled older brother in the eastern part of Ukraine, his family wanted to move farther west and away from the Russian border. Elderly grandparents and the need for special care for his brother limited their options. “While I did not want to leave them, my parents wanted me to move and live with family friends in Lviv – which I did in April.” Lviv is a city farther west from the border of Russia.

“We learned of a company which places students at US military schools,” he said. “While I wanted to study in the US, I had not planned to do so at a military school.” After testing and interviewing, he was accepted to VFMA. He obtained a visa on September 9th in Poland – the last time he saw his mother – and then traveled to the US on September 10th.

“It has been very difficult,” said Vlad. “Before leaving, I saw destroyed many buildings, the airport near my home city, many bridges – all gone. And I saw a bomb fly over my head. It was terrible.”

He has not seen much of the US or even the area around VFMAC. Entering the plebe system on arrival, he is looking forward to earning his Capshield and becoming a full-fledged Cadet. Vlad says the physical part of the plebe system is not hard as he studied Tae Kwon Do and kick boxing since a young boy.

Academically, he says math is not hard but English and US history are difficult since it is hard to read and understand everything in a different language. “The hard part is adapting to everything that is new and the need to have to learn everything again,” he said.

While he says his mother wants to see him and he wants to return to Ukraine, his mother wants him to remain here due to the ongoing danger of the war there. Vlad hopes to return during the winter holiday but the travel costs are prohibitive through Poland and then on to his home in Ukraine.

With wisdom and acceptance far beyond what any 17-year-old should be required to exhibit, Vlad says, “It helps not to think about when I will next see my family or when I can return home but best to just choose to live another life here.”

Mykhailo Bohatykov’s education was completely broken with the onset of the war. Like Vlad, Mykhailo’s parents sought to have him out of harm’s way. They researched military schools in the US. After identifying VFMA, he applied, was interviewed and accepted. He is in grade 12.

Mykhailo says the plebe system is difficult – not because the demands are difficult but because he held a high rank at the military school where he attended in Ukraine. He said, “This is like being back at the beginning.” Academically, he was accustomed to success never having scored anything less than 100 percent and earning gold medal status. Now the difference in language makes it difficult to achieve the standards he had always achieved.

Having graduated from his high school in Ukraine, he planned to go to college and hoped to do so in the US to study computer technology. He likes Boston and intends to look at schools there once he completes VFMA.

Originally from Kyiv, Mykhailo’s family remains there. As a target city, Mykhailo says the destruction is devastating. As a plebe, he is unable to contact his family. At the completion of plebe system, he will be able to call them.

With widespread international representation, there are two VFMA Cadets with Russian heritage.

One of his friends here is of Russian origin. “He doesn’t care that I am a Ukrainian and I don’t care that he is a Russian guy,” said Mykhailo. “I love that guy because on my first day, he helped me and he is always ready to help.”

“I am working hard here and want to make my family proud,” he said. “I would like to return to Ukraine when the war is over having earned rank and title and medals and show that it was good for me to come here.”

Maksym Osadchyi, also 17, is a plebe at VFMC. He planned to attend university in Ukraine to study cyber security. From Odessa, a city not occupied by Russian forces, he still is no stranger to the destruction of the bombing. “There were lots of explosions,” he said. “Once walking home from shopping with my Mother, we heard it close by and we were scared.”

Maksym learned of the scholarship opportunity at VFMC and the excellent cyber security program and, after visiting, decided to come here. “I had not thought about a military school,” said Maksym. “But I am glad I am here. because I am a completely different person than I was before. My character is stronger, I am better focused and organized, and with better time management, I can fit everything in that is required.”

The transition was not easy, he says, mostly because of the language. “Within the first week, it improved a lot and now it is easier for me to express what I am thinking with confidence,” said Maksym. And he is picking up American idioms or phrases common in general conversation such as “What’s up?”.

As an only child, he is missed very much at home. His Mother recently traveled to the US with the intention of visiting once he finishes the plebe system. She is hopeful to stay through the New Year in New York with a cousin.

“I want to go home sometime,” said Maksym. “I miss my home but it is different than it was before the war.”

He has a good friend in VFMA’s Cadet of Russian descent. “It is not right to judge a person based on the country they are from,” he said.

When Maksym completes his two years at VFMC in the Citizen Leader program (which means he is not going to serve in the US military), he is hopeful to complete his bachelor’s degree at Penn State.