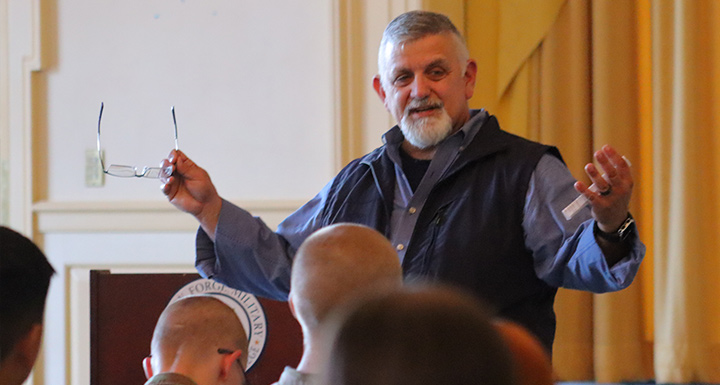 The HR McMaster Center for Security Studies Speaker Series at VFMC opened in the fall. Kicking off the series was Marc Ferraro, Executive Deputy Secretary for the Department of Military and Veteran Affairs.

“What an honor it is to be invited to open this year’s H.R. McMaster speaker series,” said Mr. Ferraro. “VFMC educates leaders and whether they are military leaders or citizen leaders, I am hopeful my experiences can help shape their futures.”

The HR McMaster Center for Security Studies is named for VFMAC graduate Lieutenant General H.R. McMaster ‘80, US Army (retired). Lieutenant General McMaster received an honorary degree from VFMC in 2017. He served as the 26th National Security Advisor during the Trump administration.

“The McMaster series is intended to draw exceptional representatives from across the spectrum of professions and life,” said Robert F. Smith, Ph.D., MEd, provost of VFMC. “Going well beyond the classroom, these speakers of renown and accomplishment demonstrate traits of character and leadership that LTG McMaster exemplifies and our Cadets are learning to do.”

VFMC’s HR McMaster Center provides academic support for currently enrolled cadets and training opportunities for alumni and community members. It is a center of excellence providing non-partisan, research-driven academic programs to prepare future leaders in the fields of national security, criminal justice, intelligence, and cybersecurity. It aims to be the preeminent, internationally recognized center of academic excellence in national security, criminal justice, intelligence, and cybersecurity.

During his remarks, Mr. Ferraro spoke about leadership traits he’s learned during his 37 years in the military and six more in state government, citing resilience as a major component. “You will make mistakes, but you can’t let that stop you. Accept it, learn from it, and keep going,” he said.

In addition, he stressed leaders have to make hard decisions noting that he still remembers the names of those in his unit lost on deployment, saying their deaths stay with him. “Many of my decisions have been hard and they all have consequences but charged with leading, I have to keep moving. True leaders have compassion but are able to remove emotion from their decisions.”

VFMC Cadet and sophomore John Marier said he was deeply moved by Mr. Ferraro’s comments. “His encouragement to never give up is inspirational.  Students everywhere, not just VFMC Cadets, need to hear that making mistakes is not the end of the world and that we can learn from them and improve ourselves,” said Cadet Marier.

In his current role, Mr. Ferraro is involved in activities across several key offices including Veterans Affairs, Administration, Facilities and Engineering, the Keystone State Challenge Academy, Public Affairs, and Policy, Planning, and Legislative Affairs. Prior to this role, Mr. Ferraro served as the Deputy, Facilities and Engineering, Pennsylvania Department of Military and Veteran Affairs.   Mr. Ferraro is a graduate of the United States Army Drill Sergeant School, Basic Airborne Course, Pathfinder School, Cavalry Leaders Course, Command and General Staff College, and the United States Army War College. He holds a BS in Accounting and an MA is Strategic Studies and Executive Leadership. In addition, he has earned numerous awards and decorations during his military service.